I recently bought a Kingwear KW88 Pro, and I’m not much a fan of the OS that came with it. In the interest of doing something different, I decided to install AsteroidOS. While this is a reasonably straightforward process, there are a few issues that I ran into that stumped me for a while, that I thought were worth writing down. 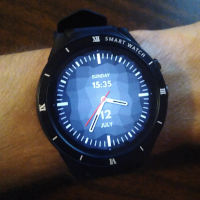 Devices based around the MTK6580 chipset don’t seem to have support for fastboot, so they use a MediaTek software product called SP Flash Tool. If you’ve used Odin for flashing Samsung devices, you may find a similar feel here. It’s open source, but doesn’t really feel like an open source tool—source code for different versions is scattered across different repositories, without a direct link from the website, and it seems that they’re used more as a way of hosting releases than of offering public development access. It does have a Linux build, but it expects a fair number of libraries to be in very specific places, which was the cause of most of my pain, and with the source being difficult to access and compile, I wasn’t able to rebase it on newer versions of the libraries I needed.

In the end, on Debian Buster, I had success downloading the latest version (v5.1916) from the SP Flash Tool website, and a copy of the required libpng1.2 library from Sourceforge. libpng1.2 is older than what’s available in the Debian archives, which is why I ended up installing it manually. The real struggle was what to do with it—I didn’t particularly want an out-of-date version of libpng permanently installed on my system. An strace later, and it seems that among other places, flash_tool checks the directory it lives in for dependencies, so copying libpng12.so.0 to the same directory as flash_tool got me up and running. (Why it needs a PNG library, I can’t say!) The AsteroidOS site says to run it as root, but I didn’t find this necessary given that my user was a member of the dialout group. Other Linux distros may handle this differently, however.

Toward the end of this process, I realized that there’s an AUR package for SP Flash Tool, which likely would have alleviated most or all of this hassle. Ah well, lessons learned!

AsteroidOS provides flashing instructions at https://asteroidos.org/install/harmony/. However, they don’t quite work out of the box1. The instructions do note2:

However, please note that only the Kingwear KW88 has been rigorously tested. Other watches have been reported to have various bugs, for instance the Zeblaze Thor has non working touchscreen. The Lemfo LES1 and Zeblaze Thor 3G have a screen rotated by 45° or the KW88 Pro requires a different scatter file.

I wasn’t able to find such a scatter file, so I wound up creating my own, which ended up being quite an easy process. As far as I can tell, it’s only the partition alignment that was causing problems, so I updated the partition sizes and positions to be the same as the ones in the scatter file from the stock ROM:

I did also have problems flashing after flashing the stock image v1.5. The Full Android Watch forum’s thread on the KW88 Pro has a post with the following:

I just try it, i have a bootloop…

The same appeared to be true to me; after downgrading from v1.5 to v1.3, the boot loop I was experiencing went away.

Flashing back to stock

I had a heck of a time tracking down stock firmware to flash this device back to its factory state. I eventually found a copy on Full Android Watch. Before blindly flashing, it’s worth noting that the person posting the links provided the following caveat:

DO NOT FLASH THIS UNLESS YOU EXISTING FIRMWARE IS NHH TYPE!!

Here is the latest version for NHH screens.

I didn’t get a reading of the initial firmware version that came with my watch, so I’m not sure what type my watch was, but it seemed to work with both of the images posted on the linked forum.

I’m not sure if I have a flaky cable, a flaky device, or what, but the flashing process sometimes intermittently failed for me. Simply trying again always succeeded eventually, but sometimes it took a few tries.