In June 2019 I bought a Samsung Galaxy Watch Active. It’s a very slick device, and checked off the few checkboxes I had specifically selected it for:

With all the features, though, I’ve found that I want my watch to do three things, and this does none of them exceptionally well:

A fourth, less tangible point is the ability to do what I want with it. It’s running Samsung’s locked down OS; I can’t easily develop or install Android apps for it since it’s running some Tizen-based OS, and of course I don’t have root access on it. Samsung is reputable enough that they’re probably not shipping off all my biometrics to China, but that’s not a sure bet either.

One thing that it does do well is notifications. My phone is now nearly always on silent mode, and important notifications (select texts and calls, mostly) buzz my watch. Bluetooth range is good throughout the house if I leave my phone on my centrally located desk, so it’s not uncommon for me to go a full day or two without knowing where my phone is. And if I do lose my phone, the find-my-phone feature is nice as well—no more “lost my phone, can you call it please?”!

I’ve been peripherally aware of the AsteroidOS Project for a few years now, but hadn’t ever taken the plunge to try it out. I purchased a KingWear KW88 Pro from GearBest in November of 2019, when it was on sale for $79.99—reasonable enough, I figure, that even if it never works for me, it’s not a $200+ experiment like many other watches. Also, it had some unique features that drew my attention:

I wouldn’t even consider using the version of Android that came with this watch, however. I don’t have words to express how bad it is. As far as I can tell, they took the full smartphone Android and made as many tweaks as was necessary to get it to compile on the watch (and no more), and shipped it. The menus are mostly English, but the text that isn’t included in stock Android looks like it hasn’t been proofread by a native English-speaking proofreader3—lots of phrases like “Please waiting for update…” or “No notification” rather than “No notifications”. It’s running an ancient version of Android, last patched in 2017, and with a 3.18.x Linux kernel. The apps’ support for hardware is good (camera, accelerometer, etc. all work), with the exception of the display: apps made for a square display haven’t been modified, so important buttons are offscreen.

Check out this quick screen capture for an idea of what I mean. Nothing is unusable, or even that remarkable by itself, but after using it for a while it’s definitely a death-by-a-thousand-cuts UI disaster. The black overlay around the outside shows where the screen ends. Play Store and Maps seem to be the worst offenders, with both displaying important controls and information outside of the visible area. Other apps are (mostly) better, but suffer from their own localization, discoverability, and functionality issues. (The Contacts app, for example, seemed prone to random crashes.) 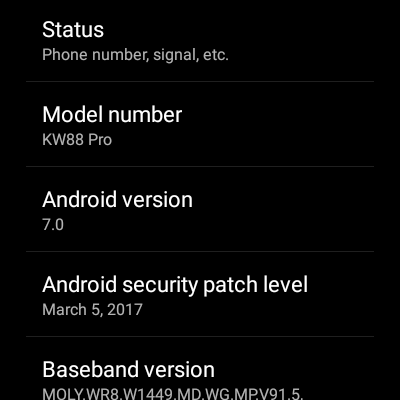 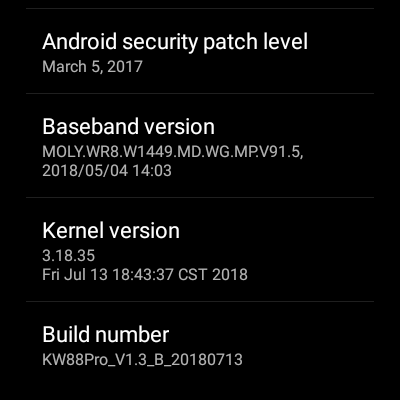 There’s an app that goes along with it. They don’t provide a Play Store link, just a link to a download page. The app won’t start without location, camera/microphone, and file access permissions, and suffers from similar UI issues as the watch, though at least all of the important buttons are on screen. And then there’s permissions: The app won’t even let you connect to the watch unless it can:

It does seemingly allow you to bypass call log, contacts, phone, display over other apps, and notification permissions, but I had to put in some effort to make that happen.

Now, these all make some sense as to why they might be necessary. That said, for an app specifically downloaded outside of the Play Store from a manufacturer I’ve never heard of, I’m a bit hesitant to grant pretty much every major permission on my device.

AsteroidOS is lovely. I can ssh in to a root shell, and run lots of neat things4 on it! But it’s nowhere near mature enough where I’d consider it ready for daily use, particularly not on this watch. I’m attempting to contribute to get it to a more stable and feature-complete state, but the going is slow.

I’m still missing, at a minimum:

In addition to the watches I’ve used, I’ve spent some time with plain old digital watches (which I generally quite like), a Huawei Watch 1, which was impressive in its day but lackluster compared to newer offerings, and a Ticwatch S, which was good for its price point, and offered a nice Android Wear experience. I have not tried either a Fitbit or an Apple Watch, though I hear encouraging things about both. I definitely see a lot of flaws in the smartwatch ecosystem, but I also see a lot of progress! I’m genuinely excited to see what watches will look like in a few years, as technology continues to improve.

For all the watches: Notifications on my wrist are really, really nice. It feels to me like I’ve finally moved from polling to interrupts, and anything that can reduce the amount of time I spend looking at my phone is good in my book!

Currently, AsteroidOS seems most strongly on track to provide the experience I want, and unlike the other options, I can actually fix what I don’t like about AsteroidOS. Both proprietary options are okay, but have gripes that simply can’t be fixed, and I can’t use the tools I’m used to to develop for or use them. (I was stunned to find out that rsync Just Worked™ to copy my media over; now all I have to do is write a music player!) Perhaps a sub-conclusion—it’s amazing how much more comfortable I feel working on these projects when I have a familiar POSIX-ish environment everywhere!

Besides the practicalities, AsteroidOS provides some nice intangibles too. I like the community, and I’ve felt welcome and appreciated as I’ve tried to step up and contribute to the project. I like the design philosophy; Linux and Wayland and DBus and BlueZ and all the other things I use on my desktop work on my watch too, just on a smaller scale. I may not be running Firefox and Sway… but I could if I wanted to! (I have contemplated a terminal, if I can get a bluetooth keyboard working!)

With all this in mind, I’m sticking with AsteroidOS for the near future, and I’m hoping to be able to deliver some progress for the ecosystem myself. Ah, the joys of open source!

Thanks to Käthe for reviewing a draft of this post.