Setting up an ODROID-HC4 as a NAS 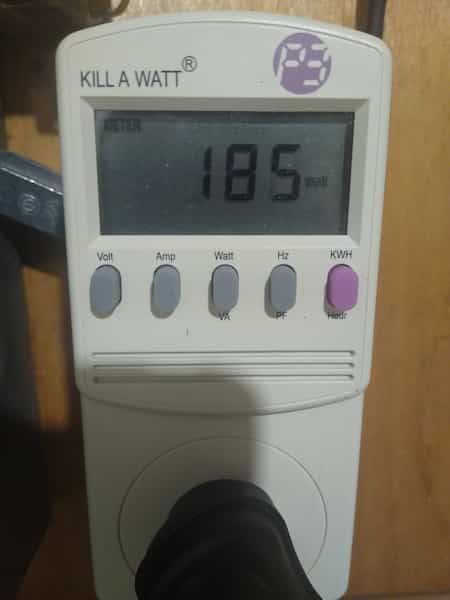 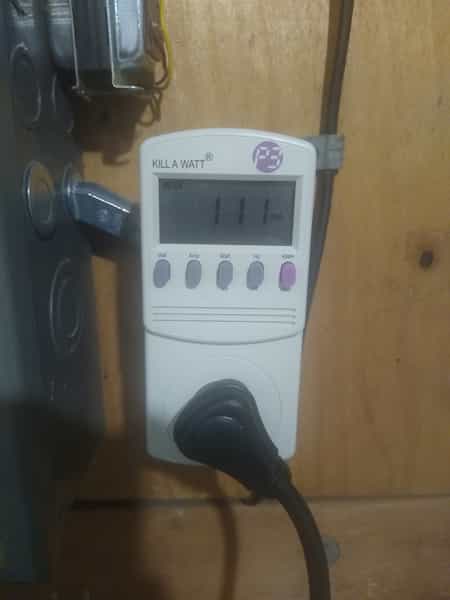 I keep the Kill-A-Watt measuring the whole homelab, so those numbers are for the while rack. However, without any NAS at all the total sits just over 100W. That is, I cut my power consumption by something like forty percent by replacing one of my four machines—and not even the fastest, by a good margin!

With electricity prices just below the national average of $0.13/kWh, I generally figure 1W=$1/year. So if I cut my power consumption by a bit more than 70W, this should pay for itself in just over a year.

Note that this is steady-state power; I suspect numbers would go up under heavy access. However, my NAS spends 90+% of its time idle, so I’m most concerned about its performance there. I did see nearly 40W on startup, with both disks spinning up plus higher CPU usage, so that seems like a good upper bound. Even if it was at this state all the time, I’d still be using less than half of my previous power consumption.

There are several North American resellers of Hardkernel products, but their markup is big enough that I opted to buy directly from Hardkernel1. I did have some issues the first time through the purchase process (the largest of which was that when I was filling out my info in the purchase form, many of the labels weren’t in English…until some reloads later, when they suddenly were!), but ended up making it through. The shipping was surprisingly fast for crossing an ocean; from clicking “ORDER” to opening the box took just under seven days.

Wow. Super slick. This thing is pretty great! The case is sturdy, and seems to support the drives well. The “toaster” form factor is kind of cute, and definitely serves its job well. I suspect it may not protect the drives as well as fully enclosed models, but on the upside it does do a nice job keeping good airflow for cooling.

Speaking of cooling, there’s a built in fan that I never once saw spin. I did a bit of compiling, and the temperature indicator budged from 50°C where it usually sat to nearly 60°C, but it never did actually break 60°. Perhaps if I stressed the CPU and GPU (not sure why, with a headless device) and put a good load on the disks so the power supply and PCIe controller are working, I might be able to get the fans to kick in, but under normal use it’s cool as a cucumber.

The CPU is reasonably speedy, and 4GB of memory isn’t anything to scoff at. I did some development of the OLED display driver software on the device itself, and though I eventually moved to cross compiling, this was more for toolchain reasons than for speed. The hardware is certainly more than sufficient for serving files over the network, as long as I’m not doing particularly heavy-duty encryption or compression.

Single-core performance for encryption was the one issue I did run into; scping files within my network did bottleneck on my single-core speeds, limiting me to about 60MB/s instead of the full 100-110MB/s that’s typical with a gigabit network. Of course, Comcast’s anemic upload speeds ensure I’ll never have to worry too much about that!

I opted to pay the extra $10 for the integrated OLED display. In hindsight, totally worth it! (It also adds a battery backed realtime clock, so that adds extra value too, but the display is easily worth it on its own.) While I was running some initial backups (in case I had problems switching over to the new NAS) I took the time to try to figure out how I wanted to use the display.

The wiki page for the ODROID-HC4’s OLED display links to some sample software, written in Python, that can be used for running the display. However, it’s fairly dependency heavy, and requires maintaining a Python installation. This seems like a fairly good candidate for a zero-dependency statically-compiled drop-in binary, so I set about writing a small app in Go to do what I wanted. 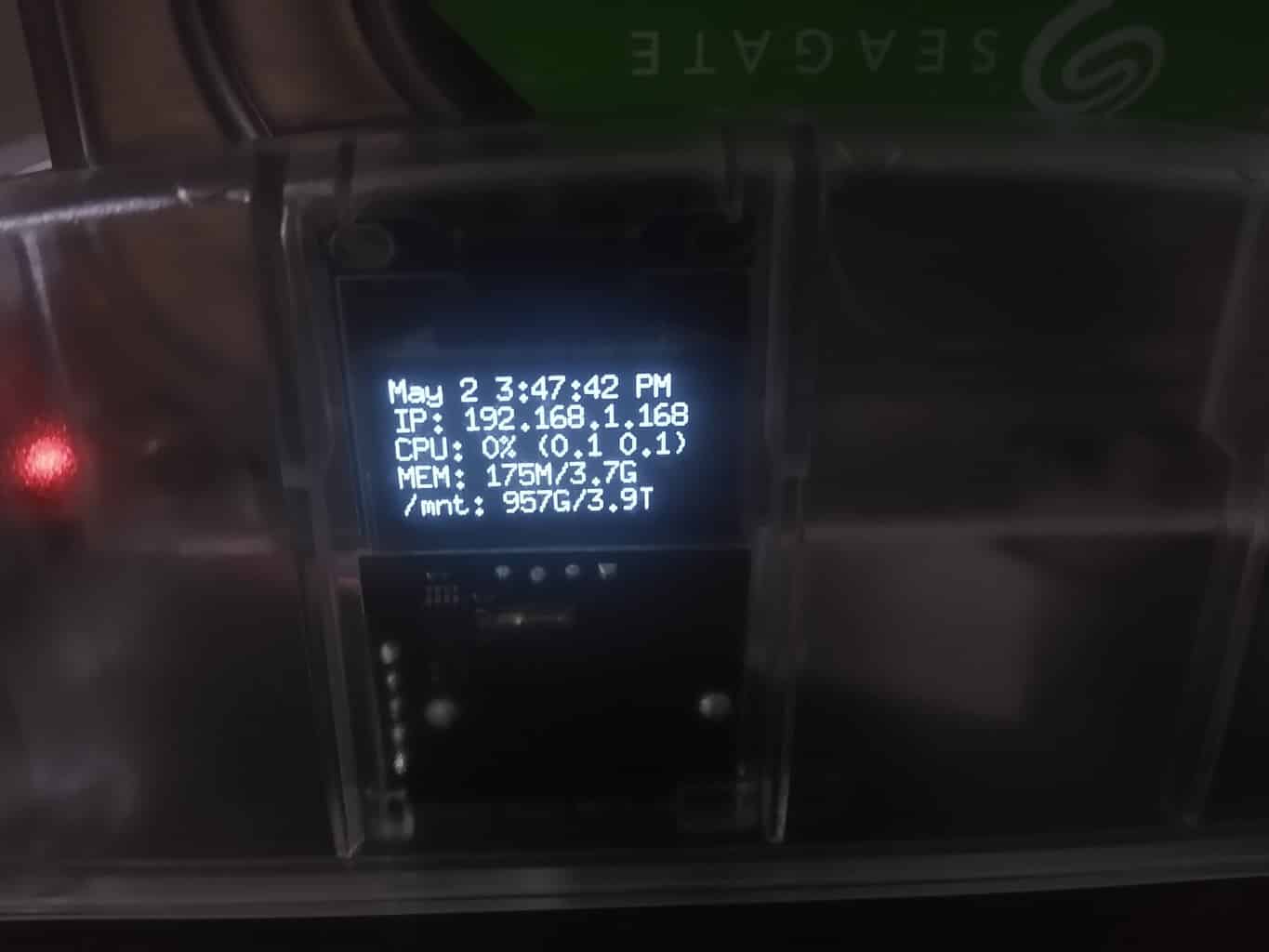 The result is on GitHub; I’m pretty happy with it!

I have in the past used FreeNAS (now TrueNAS CORE), but I was hoping to migrate away in favor of something I could manage more directly. Even if I had wanted to stay with FreeNAS, though, my hand would have been relatively forced since this board doesn’t have good support for FreeBSD. Linux support for ZFS is supposedly quite good at this point, and since Jeff set up his NAS in about 15 minutes on Void Linux, I figured I could make it work.

Hardkernel offers official images, but they seem to be stuck on Linux 4.9 (an LTS release from 2016) with no plans to move to more recent images. Also, while they do provide the kernel source code, I wasn’t able to find packaging info or build scripts for the images they produce. I prefer more transparency than that in the build process, so I went searching for something else.

Ideally, I’d have tried for a Debian install, but Debian’s ARM support seems patchy. My next attempt was Arch Linux ARM, but they don’t support the HC4. After some searching, it turns out Armbian seems to be the best supported distro for the HC4, so that’s what I chose.

After running through Armbian’s setup process, here’s the config I had to change to get the NAS set up the way I wanted:

Now we’re ready for some disks! I had two 8TB disks set up in Freenas as a mirrored pool. Some historical baggage remained – the pool was still called Duluth from two moves ago2. Plug the disks in, and let’s re-import the pool as nas:

This isn’t terribly useful as a NAS yet. I can mount filesystems from Linux with SSHFS quite easily and with decent performance (assuming I remember to turn compression off, as single-core compression limits my throughput); but for MacOS or Windows clients I’m out of luck. With this in mind, I intend to get NFS or SMB (or both!) shares set up. This will also let me easily mount shares to VMs when I want to offload data from the VM hosts, and keep them backed up.

I also intend to set up an automated backup solution. I’ve had fairly good luck with pointing Duplicity at B2. I’ve also heard good things about Borg Backup, but I don’t believe that it directly supports targeting B2, and I don’t have a remote server to stash backups on.

Finally, I’m still not thrilled with Armbian; it’s done reasonably well, but I do prefer to trust the most important piece of server hardware in my house to a big-name distribution like Debian. I’m considering trying to get support for the ODROID-HC4 merged into Debian and/or Arch Linux ARM so I have a distribution I’m more directly familiar with to use. Also, after getting settled in with Armbian, I did see that Alpine is supposed to have decent aarch64 support, so that may be worth exploring as well.