Last week, Jeff and I had some questions about some specifics about how the BitTorrent protocol works. Over the course of a conversation, I realized that, despite years of using torrents to download Linux ISOs1, I had at best a surface-level understanding of the protocol. That’s a shame, because peer to peer file sharing involves some really neat tech! One of the best ways to understand how something works is to build it, so I wrote a toy BitTorrent client that implements the bare minimum necessary to download a file.

At a high level, here’s how the BitTorrent protocol works, in the simplest case:

If this isn’t the world’s worst BitTorrent client, it must certainly be in the running! That’s okay though; it was only intended to be a learning tool, and not a production-ready software suite.

Features it lacks (in no particular order):

Features it has (alphabetized for convenience):

Notes on the protocol

The BitTorrent protocol is brilliant. It’s a great example of software that does what it was designed for incredibly well. It also does it in such a way that, once it exists, makes one say, “Why didn’t I think of that?”. It’s a simple and effective solution that fits its problem domain very well.

The original release of the BitTorrent application was in July 2001. I, naturally, was closely following every development in the space, having recently turned four years old at the time. While my commentary is limited by a lack of context in many ways, I do find it interesting to understand many of the decisions in context. “Why bencoding? Why not just JSON-encode everything?” Well, Chandler, you see, JSON didn’t exist yet! (Or, at least, JSON.org and the JSON spec wouldn’t come to be until 2002. But apparently YAML was already around2?)

Unfortunately, the thing that drew me to implement the BitTorrent spec also ended up being a thorn in my side the whole time I implemented it: The spec, printed, would fit on about five and a half pages. Unfortunately, it’s written in a way that leaves a lot of details ambiguous and hard to understand. For example, one thing that stood out to me as particularly confusing was the specifics on the length prefix on messages. As far as I can tell, quoted here is the entirety of what the protocol doc has to say about message length prefixes:

The peer wire protocol consists of a handshake followed by a never-ending stream of length-prefixed messages.

All later integers sent in the protocol are encoded as four bytes big-endian.

That’s it for handshaking, next comes an alternating stream of length prefixes and messages. Messages of length zero are keepalives, and ignored. Keepalives are generally sent once every two minutes, but note that timeouts can be done much more quickly when data is expected.

All non-keepalive messages start with a single byte which gives their type.

I eventually got this figured out, but it took a lot of looking back and forth between my code and the spec to figure out why I wasn’t getting the responses I expected. Some specifics that weren’t obvious:

With the benefit of hindsight, most of this ends up being reasonably clear. I’d been conflating what I was thinking of as a message (“the thing that gets sent across the wire”, possibly Layer 5; includes a length prefix) with what the spec calls a “message” (“the thing after the length prefix that starts with a byte indicating its type”). The length is the length of the message that follows. All perfectly clear now, but far from it on the first many read-throughs!

D’oh! I need to get my vision checked. As I was proofreading this post, I went back to check one more time, and found it, right there, right where I should have been looking, both points, clearly spelled out:

Dictionaries are encoded as a ’d’ followed by a list of alternating keys and their corresponding values followed by an ’e’. For example, d3:cow3:moo4:spam4:eggse corresponds to {‘cow’: ‘moo’, ‘spam’: ’eggs’} and d4:spaml1:a1:bee corresponds to {‘spam’: [‘a’, ‘b’]}. Keys must be strings and appear in sorted order (sorted as raw strings, not alphanumerics).

Credit to the author(s) on this one, I guess!

I ended up writing a full first pass at the entirety of the implementation using just the original spec. I deliberately didn’t “cheat” by looking at code from other implementations; this was partially a challenge to myself to see if I could do it from the spec alone.

However, once I had prototyped out the code and started debugging the flaws in my implementation, I ended up being confused on a handful of points, and I did reach out for some additional resources. (Specifically, length prefixes, as I implemented them, included the four bytes of the length prefix as part of the length, causing Transmission, the client on the other end of the connection, to expect more data and not respond.)

Third party documentation turned out to be much more enlightening (and verbose) than the official spec. (https://wiki.theory.org/BitTorrentSpecification in particular is a fantastic resource, and one I’d highly recommend to anyone else looking to implement the protocol.) They provide essentially the same information that the spec does, but more clearly spelled out, and in a way that (to me) was much more obvious on a first read. Particularly, I found their descriptions of choking/unchoking and declaring interest much more enlightening than the original spec’s descriptions.

Wireshark, as recommended by the BitTorrent spec, ended up being very helpful for showing what packets I was sending and receiving, comparing them to a known-good implementation of the spec, and dissecting the parts of the response to validate that my parser was parsing properly.

Interestingly, I would have done a poor job of predicting in advance what resources I would make the most use of. Ol’ reliable, the debugger, barely came into play; my issues for the most part weren’t in understanding what my code was doing, but rather what it was supposed to be doing.

Instead, one of the most (unexpectedly) helpful tools ended up being Transmission, the torrent client I was testing against. The peer list that you get from a client is surprisingly detailed, while still helpful, and (beyond the basics) lists information like whether or not we’re choked or interested, what the state of the connection is, and how much we’ve uploaded/downloaded. 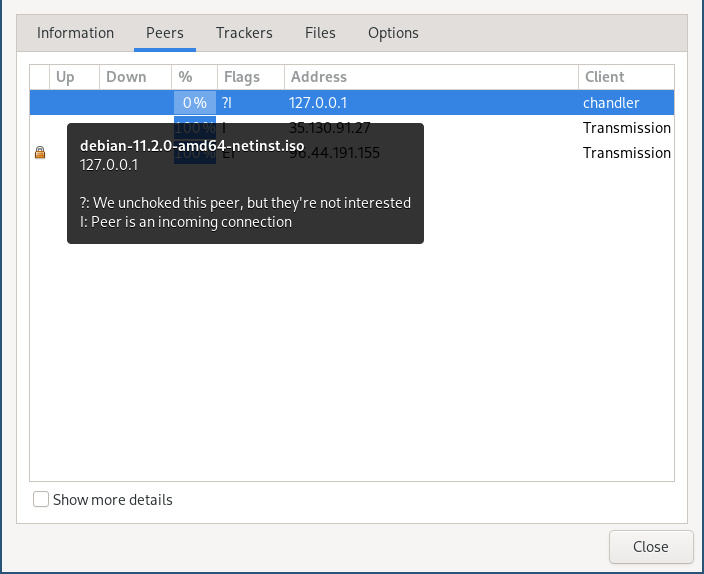 Even though I didn’t come up with a complete implementation, I was able to answer the question I’d had at the beginning: Why don’t BitTorrent trackers get hit by DMCA takedown requests? Turns out, it’s awfully hard to enforce copyright on a map of a 20-byte SHA1 hash to a list of IP addresses (and not even the hash of the tracked file; rather, the hash of some data including hashes of the file’s pieces!). Trackers don’t know the contents of the torrent, nor even the name. (Plus, a torrent can contain multiple trackers, pull peer information from the swarm via DHT, and exchange peer lists with other peers, which in total severely limit the ramifications of a tracker being taken offline, even if it’s legally possible.)

Specifics aside, I wish I had done this years ago! Writing a program from a (simple) spec and getting it to interoperate with other software is a really fun and enlightening project. It was a great way to dive into a problem area I didn’t know much about and learn a bunch about how it works (plus a chance to write lower level code than I often otherwise might!). The protocol wasn’t, perhaps, as nicely specified as I’d have hoped, but it wasn’t bad, either; it’s relatively simple, especially if I’m not trying to implement every feature perfectly.

One of the neat things about having done a few of this type of project is that it really acts as a great confidence booster when I’m considering implementing new protocols. I’d been reading about CardboardWM, and a month ago I never would have considered what it would take to write my own window manager. But now? …maybe that’s next!